Ever wanted to fly a chopper? 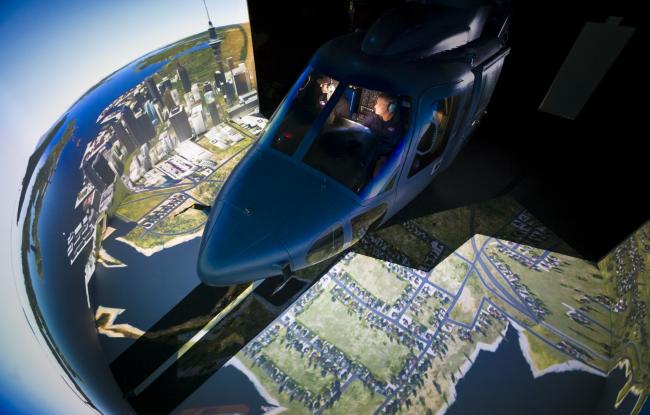 Learn how to fly a Sikorsky S-76 helicopter on your own, or share your simulator experience with family and friends. When booking your session, for an optimal experience we recommend a maximum of four people per hour, especially if everyone would like a turn at flying. Ten hour concession cards are also available. The minimum age to fly the simulator is 12, however children are allowed to sit in the back of the simulator while being taken for a flight. Those under 18 can take the controls, but must be accompanied by a responsible adult.

The simulator is available 7 days per week – mostly between 9am and 5pm but times outside of this are also possible (subject to availability).

Built using the wreck of a Japanese Coastguard aircraft that was damaged during Japan’s 2011 tsunami. Simulation based training is particularly important because it allows pilots to practice safety drills and flight contingencies that cannot be safely attempted in a flying aircraft. Software was installed to create a realistic flying experience and NEST believes it is one of the best simulators in the world.

The simulator allows pilots to practice in more extreme conditions, without risk to crew members. For example, a routine trip from Whangarei to Auckland could become much more testing in the simulator with storms, white outs and engine failure all part of the mix.

The simulator is housed inside a hangar at Whangarei Airport. Seven computers run five projectors, which cast images on to a curved 270-degree screen and the floor; the result is an incredibly realistic experience that even makes it possible to suffer air sickness.

An effective positive training can be reached only if the pilot is sufficiently “tricked” into acting as if the simulation exercise was a real operational job. This goal requires a very high level of realism, especially in the field of external environmental conditions. This is covered by the notion of “synthetic natural environment” such as terrain, roads, bridges, buildings, cloud etc.

Scenarios can be created that incorporate environmental or mechanical challenges that may carry significant risk, or more extreme scenarios that cannot be simulated in the actual helicopter. Specific scenarios that are easily created in the simulator include weather difficulties, such as rain, snow, and thunderstorms, reduced visibility, and mechanical malfunctions such as engine failures.

Shaping our culture and stories with the latest in technology

See how augmented and virtual reality can help amplify our local stories and culture. With hands on experiences and demos.

Free coworking throughout New Zealand! Enjoy a free day of coworking at The Orchard Business and Event Hub on 22 May 2018.

Concept to functional metal parts for all.

Concept to reality in metal with common technology.